In front of colleagues, family and friends Dorottya Veres successfully defended her PhD thesis. The aim of Dorottyas PhD project was to focus on post-translational regulation of glucosinolate transporters. 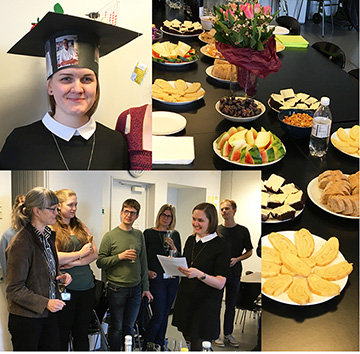 Transport proteins represent the connection between the interior of the cell and its environment and play a crucial role in multiple processes such as nutrient uptake, maintenance of cellular homeostasis and intercellular communication. On a higher level, transporters affect the distribution of their substrates throughout the entire plant. Protein-level regulation allows for a fast response and post-translational modifications have an important role in transporter regulation. However, post-translational modifications in plant transporters remain largely unexplored.

In her PhD thesis, Dora investigated the post-translational regulation of the two glucosinolate transporters GTR1 and GTR2 using untargeted screening to identify interacting proteins in post-translational modifications. Dora identified several candidates involved in response to biotic and abiotic stress and several redox-regulators. From the several kinases identified, one kinase negatively regulated the transport activity of GTR2 in Xenopus oocytes and two others potentially increased the activity of GTR1. The results represent the first step in characterization of the post-translational regulation of the glucosinolate transporters and contribute to the understanding on how plants coordinate the distribution of glucosinolates in response to the ever-changing environment.

Dorottya Veres holds a BSc in Biochemistry and a MSc in Molecular Biology from University of Babeș-Bolyai in Romania. Thus, her education covered chemistry, biochemistry, molecular biology and biotechnology. During the spring of 2015, she spent three months as an Erasmus+ intern at DynaMo Center before returning to Romania to defend her Master thesis on salt tolerance in Arabidopsis.

In August 2016, Dorottya started as a PhD student at DynaMo being part of the STS (Synthesis-Transport-Storage) subgroup. Her main supervisor was Head of DynaMo Barbara Ann Halkier and co-supervisor DynaMo partner Associate Professor Hussam Nour-Eldin.