On 11 February, Lasse Meyer defended his MSc thesis in Biology-Biotechnology entitled "Elucidating the amino acid residues responsible for the substrate specificity of a glucosinolate exporter”.

Plants within the Brassicales order transport glucosinolates (GLS) to its developing seeds. These GLS are antinutritional, thereby lowering the nutritional value of the seeds for consumption by humans or livestock. 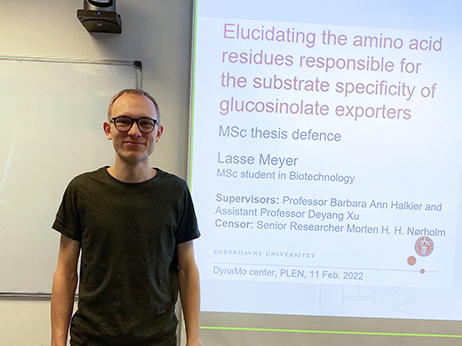 Testing five of these 11 residues individually disclosed two mutants that both reduced GLS transport activity by ⁓80-90% to that of wildtype transporter, suggesting that these are important residues for the GLS specificity. The first steps were taken towards the investigation of the origin of GLS specificity of the exporters. In contrast to what was the case for the GLS importers, the GTRs, preliminary results do not disclose the possibility that GLS specificity originated before specification into the Brassicales order.

Lasse did both his bachelor and master project at the center. Lasse was supervised by Head of DynaMo Center Professor Barbara Ann Halkier and Assistant Professor Deyang Xu and he will continue working in the DynaMo Center as Research Assistant.