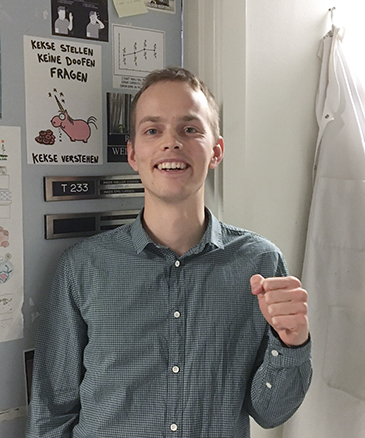 Mads after the examination

Glucosinolates (GLSs) are defense compounds produced by plants in the Brassicales order and health—promoting compounds for humans. Mads’ thesis work aimed at functionally expression in yeast of the chloroplast-localized IPMI enzyme in the production of chain-elongated amino acid precursors such as dihomomethionine in glucoraphanin biosynthetic pathway. Based on chloroplast targeting peptide predictions, multiple constructs with various truncations in the N-terminal of the large subunit of AtIPMI were tested for activity and found to affect the protein stability differently.

Furthermore, Mads’ thesis work aimed at improving the production of glucosinolates by boosting the activity of the cytochrome P450s (CYP450s) in the glucosinolate core structure pathway. The work included investigation of the impact of various electron donor proteins - all A. thaliana cytochrome b5 isoforms, a cytochrome b5 from C. forskohlii and a cytochrome b5 reductase - on the production benzyl GLS (BGLS) and desulfoBGLS in a BGLS-producing strain. The observed effects indicate possible paths to increase BGLS production in the future.

Mads Møller Dissing did both his bachelor and master project at the center and worked as lab assistant for two years. Mads was supervised by Head of DynaMo Center Professor Barbara Ann Halkier and former postdoc Cuiwei Wang.