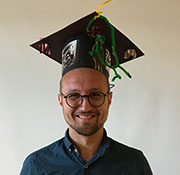 The overall objective of Nikolai’s PhD project was to study the relationship between structure and function in the NPF family of plant transporters.

Nikolai Wulff holds a BSc and an MSc in Biochemistry from the University of Copenhagen before he started as  a PhD student at DynaMo Center in April 2016 with Associate Professor Hussam H. Nour-Eldin as main-supervisor.