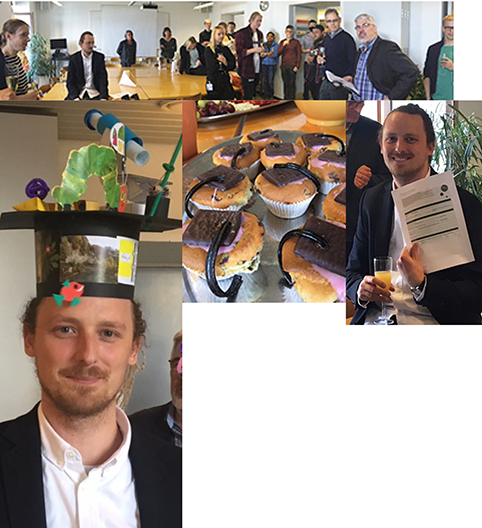 The overall objective of Pascal’s PhD project was to study how a plant balances synthesis, transport and storage of defence compounds upon biotic attacks.

Pascal used confocal and electron microscopy to characterise the glucosinolate-storing S-cells in the flowering stem of Arabidopsis thaliana and to study their coupling with neighbouring cells that actively synthesise this defence compound. A bioassay revealed that young rosette leaves of Arabidopsis accumulate large amounts of glucosinolates and thus are avoided by the caterpillar. The bioassay revealed as well that this accumulation depends upon glucosinolate-specific membrane transporters. In contrast to the herbivore attack which involves whole plant responses and long-distance transport of the defence compounds, a local attack by powdery mildew was independent of membrane transport. Here the attacked cells responded autonomously by biosynthesis of glucosinolates. In conclusion, plants use different strategies - involving mobilisation of stored compounds, new synthesis and transport - to tailor their defence optimally to the concrete threats.

Pascal holds a BSc and a MSc degree in Biology from the University of Fribourg, Switzerland before he started as a PhD student in August 2015 at the DynaMo center in collaboration with the Center for Advanced Bioimaging (CAB) with Head of CAB, Professor Alexander Schulz as main-supervisor and Head of DynaMo, Professor Barbara Ann Halkier as co-supervisor.

The assessment committee unaimously and with great pleasure recommended that Pascal was awarded the PhD degree.