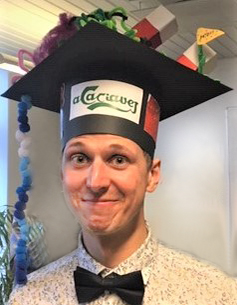 Following DynaMo tradition, Dr. Peter Millard received a personal PhD hat made by his colleagues and showing details of his life and merrits.

Peter Sørensen Millard holds a BSc and a MSc in Biology-Biotechnology from the University of Copenhagen.  He carried out both projects with DynaMo partner Associate Professor Meike Burow as supervisor. In 2015, Peter was awarded with one out of two highly competitive PLEN PhD stipends to carry out his PhD project with Meike Burow as supervisor. The project was carried out in close collaboration with Professor Birthe B. Kragelund, University of Copenhagen.

Peter investigated protein structure and molecular functions of TFs from the MYB family from different angles. Members of the MYB family regulating the well-studied pathway of glucosinolate biosynthesis serve as models to investigate structure and protein level regulation of MYB TF activity. A comprehensive analysis of predicted structure suggested that intrinsically disordered regions are common within the protein family, and experimental structural characterisation validated some of these predictions for two MYB TFs. The binding site mediating interaction between MYB and MYC TFs regulating glucosinolate biosynthesis was mapped and characterised, allowing accurate prediction of new interactors.

The PhD committee was excited about Peter's work and unanimously awarded him the PhD degree with great pleasure.