EVOLUTION It seems obvious, but researchers have only now been able to proof experimentally that herbivores play an active role in the evolution of plants. The proof is published in the acclaimed scientific journal Science where an international research group shows a clear link between the evolution of a plant genome and the herbivores feeding on the plant. The findings are based on novel genomic technologies coupled with 39 years of field data on aphids in wide regions of Europe. Subsequently, the researchers succeeded in re-establishing the findings under controlled conditions in growth chambers. 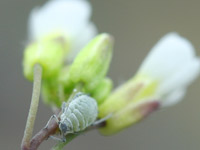 While the aphid is happily consuming the
thale cress, it simultaneously causes the
plant´s genome to change.
Photo by Tobias Züst

-We have provided proof that a plant’s genome variation may change depending on the herbivores feeding on it. Our study has looked at aphids and we have succeeded in documenting that these tiny animals play an active role in the evolution of plants explains one of the authors of the article, the American Professor Daniel Kliebenstein, who is also partner at DynaMo Center of Excellence, University of Copenhagen.

Plants are threatened by a wide range of animals, fungi and bacteria wanting to consume them. In response to this hostile world, plants produce a whole arsenal of toxic chemicals to deter herbivores and to slow the growth and reproduction of their enemies. In turn, some herbivores have evolved a tolerance to parts of these chemical compounds, making the effectiveness of any individual chemical compound dependent on the herbivore species attacking it. A plant therefore must continuously diversify the composition of its defense compounds to the pests surrounding it. It is this connection which has now finally been proved scientifically.

The study looked at the interaction between two aphid species habiting in northeastern and southwestern Europe, respectively, and the weed plant thale cress (Arabidopsis) which grows all over the European continent. As the two aphid species live in two different geographical regions and thale cress is common at both locations, the researchers examined whether there would be any differences between thale cress from each of the two regions. The researchers carefully scrutinized the thale cress genome and discovered a significant variation in the profile of the biochemical defense compounds based on what region the plant came from. These results suggested strongly that the species of aphids influences the evolution of the plant genome.

The next step was to determine whether the similarities between the distribution patterns of the plants and the two aphid species was more than coincidental. To do this, the researchers observed what happened when the different aphids fed on five generations of experimentally raised thale cress. They confirmed that the plants genetically adapted to the aphids, with each successive plant generation showing less damage from the feeding insects.  A change in the genetic makeup of the plant populations accompanied this trend – and the laboratory plants evolved in a way that tracked the geographic distribution of the two aphids and the plant chemical profile.

- Our data show that even two herbivores as similar as the two aphid species we investigated, are able to shape the genome of a plant, states Daniel Kliebenstein. He continues, amazingly we could link the interaction of two aphids and one plant in a tiny growth chamber to the consequence at a continental scale. This link proves that natural enemies may cause geographic variation in a plant genome.

This study only asked how two insects out of the hundreds or thousands that eat a plant can shape a plant’s genome across a continent. Researchers still don’t understand how a plant’s full genome allows it to successfully navigate all of the insects within its community in order for it to survive. However, the findings of Daniel Kliebenstein and his colleagues are an important step towards disclosing this.

DynaMo Center of Excellence, where Daniel Kliebenstein is partner, is intensively researching the naturally occurring chemicals involved with plant defense.  With a better understanding of the synthesis of these defense compounds and how the plant mobilizes them, it will give knowledge to develop new crops with a much higher pests resistance than those currently used. In addition the center explores the potential of the plant defense compounds for improving human nutrition and fighting cancer.

Read the article in Science here