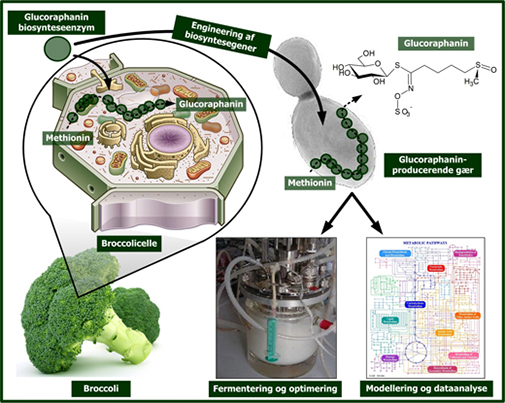 Intake of glucosinolates via consumption of cruciferous vegetables (e.g. broccoli and cabbages) has been associated with numerous health benefits as well as prebiotic effects. Glucoraphanin is the major glucosinolate associated with the health-promoting effects in broccoli. To obtain these effects high amounts of broccoli must be eaten, which has primed a desire to develop microbial production of dietary glucoraphanin supplements as stable, rich source.

We are exploiting both bacteria and yeast as microbial host organisms. In yeast, we have established a versatile platform for stable integration into the genome of complex multi-gene pathways. As proof-of-concept, we successfully engineered production of indole glucosinolates. In E.coli, we have obtained production of dihomomethionine. In our microorganisms we will combine both pathway and transport engineering strategies to obtain cost-efficient, microbial production of glucoraphanin.