Identification of the glucosinolate transporter complement 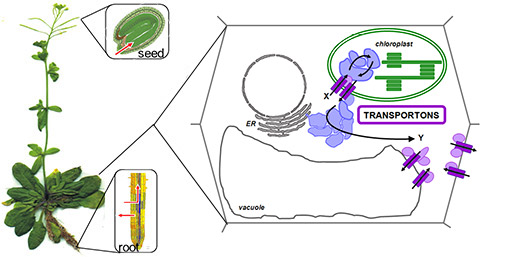 Glucosinolates and Arabidopsis is an excellent model system to study the dynamic molecular interactions between components of the biosynthetic machinery distributed across several compartments, and to study how glucosinolates are translocated from production to storage site.

Intra- and intercellular transport of metabolites is essential for many processes, such as nutrient acquisition, cellular homeostasis, cell communication, and for coordination of growth and defense responses in multi-cellular organisms. Moreover, upon long-distance transport, a given metabolite has to cross multiple membrane barriers as it exits source tissues and enters sink tissues. At the subcellular level, additional barriers are crossed due to compartmentalization.

We have identified two glucosinolate importers which are essential for seed accumulation, in intra- and interleaf distribution and for exudation into the rhizosphere, where glucosinolates play important role in shaping the microbial community in the rhizosphere.

However, we still do not know how glucosinolates are exported into the apoplast from biosynthetic domains and what the physiological importance is of these export processes. Moreover, we know that glucosinolates are stored in vacuoles but are made in the cytosol. How are glucosinolates moved into the vacuole? And are they remobilized for long distance transport to other tissues during development? These questions can only be answered by identifying the full glucosinolate transporter complement at the molecular level.

We will identify vacuolar importers and exporters of glucosinolates by screening for transport activity using cDNA libraries expressed in oocytes of Xenopus laevis and by searching in co-expression databases. Candidate transporters will be validated in planta using loss-of-function mutants and grafting experiments with GLS biosynthesis mutants and transporter mutants.

Ultimately, we expect to unravel how glucosinolates are translocated from production site to storage site, and to generate a dynamic model for movement of these compounds within and between organs in the plant throughout development.

Video abstract of Transport of defense compounds from source to sink: lessons learned from glucosinolates.